Introduction to the Planets

Now, let’s remember that a planet in the horoscope is always in a zodiacal sign and in a house. In astrology, the planets represent the active forces in your life. A planet's qualities or traits (love, communication, emotions, energy, etc.) are affected by the zodiacal sign within which it appears. The houses are areas of your life, and each house has a special purpose. The second house, for example, relates to your possessions, all the things you own and is reserved for certain types of experiences. When you have a planet in a house, you are more likely to experience and express the qualities of that particular planet.

To understand the importance of the planets in terms of human activity, it helps to consider the planets as part of your own personality. The planets are like actors in your movie and the zodiacal sign where a planet appears represents that planet’s character, its attire, its motivation, you might say. The houses are the scenery, the settings for the action. You can have an actor (planets) just being him/herself and not playing any role, but the costumes and the scenery (signs and houses) can’t stand on their own without the actor. 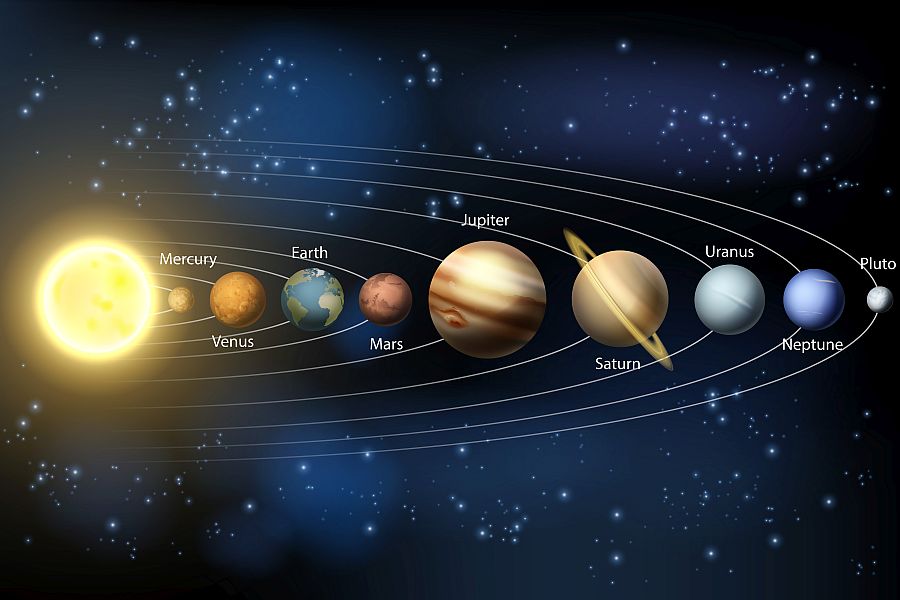 There are ten planets used in the field of astrology. They are broadly classified in two categories: the Inner Planets and the Outer Planets. The inner planets are further defined as Inner Personal Planets and Inner Social Planets.

All of the seven Inner Planets have the fastest orbital cycles. Inner Personal Planets refer to the five visible planets: the Sun, the Moon (also known as the Lights or Luminaries), Mercury, Venus, and Mars. These planets in the astrological chart are the most closely related to you as an individual. They also have the greatest impact on the expression of your personality. The two Inner Social Planets are Jupiter and Saturn; they have more significance on how you relate in and to society.

Here is a brief description of each of the 10 planets and their qualities:

The Sun represents how you express yourself, your unique identity, your self-esteem, your natural urge for recognition, your self-admiration and the facets you consciously express. It represents the hero, and the star, you are trying to become.

The Moon portrays your unconscious, receptive, emotional side. It displays your particular temperament and how you react without thinking. It also represents your memories, prior experiences, your inner wants, doubts, and expectations.

Mercury rules the conscious side of the mind; it is the planet of intelligence and communication. Mercury allows you the ability to perceive, reason and make sense of the world. Mercury reveals a great deal about your Intelligence, language, speech, writing and all forms of communication.

Venus is the planet of romantic love and reveals much about your desire and need to find balance and harmony. Venus also covers the non-sexual attraction among people and rules anything of a social nature, arts, beautiful things, and friendship.

Mars is the planet of action; it shows your capacity to turn ideas into action. Mars represents your aggressive nature; it symbolizes virility, violence, courage and fearlessness. Mars also rules your energy levels, your libido, and your urge to be first.

Jupiter has a very strong influence on how you relate to society as an individual. Jupiter represents your desire for growth and expansion, success, and freedom. Jupiter is also the planet that relates to your experience with religion.

Saturn is about structure, restrictions, responsibility, and boundaries. Saturn rules old age as well; it represents sages, elders and authority, like scientists and knowledgeable persons. Saturn lessons are some of the hardest to learn and the longest to master. Saturn is about growing up and taking responsibility for your actions.

Uranus represents new ideas and innovations. It represents the unexpected and disruptive, revolution and disasters. Uranus also affects your choice of friends and the groups you are involved with.

Neptune rules everything that is intangible, amorphous, mysterious, and hard to define. It also reveals the truth that anything is possible. It's often experienced as fantasy and escapism.

Pluto is related to transformation and regeneration, death and rebirth. It shows your ability to transform your negative influences into something more constructive.