Which feels kind of weird, because I am a Capricorn, myself. So, it’s like I am saying happy birthday to myself when... my birthday isn’t really until January 14th. ☺

Capricorn is the 10th sign of the zodiac, ruled by the planet Saturn, is an Earth sign and, one of the four cardinal signs. The Sun moves into Capricorn from around December 22 until about January 19, depending on the year, and the decans are as follows:

We were actually just talking about the zodiac symbols in the last St. Louis Astrological Association meeting, and it was so funny:

“Well, all of the signs have more modernized versions of the symbols.”

And naturally, I pointed out, “That’s because Capricorn is far, far too busy to concern itself with switching up a perfectly serviceable symbol.”

“But it’s also symbolised by the devil.”

Which is a very, very Capricorn thing to say from start to finish. The symbol is a sea-goat; the goat portion meant to signify ambition, determination, intelligence, steadfastness and an adaptability to thrive under the harshest conditions. The fish part, which, many people forget, is meant to represent the deep rooted passion, intuition and direct link to the soul type of nature that lies within each and every Capricorn.

Ya’ll think we’re kind of stoic and aloof, but you forget, Earthy. Primal.

Most people will tell the tail of Pricus, the OG sea-goat, here. He was sort of Saturn’s right-hand man for a while and understood how to manipulate time itself, too. There was nothing the sea goats loved more than to come up out of the ocean and sun themselves on the shore, but the longer one stayed there, the more goat they’d become, losing their tails and their vast intellect. Pricus became very upset at having lost many of his children this way. So, over and over, he’d mess with time, get his kids back, right up until he realized it was going to continue like this forever. So, he petitions the other Gods to take his life so that they might remain in the sea, which, is ultimately how the constellation Capricornus was formed. And this is the story most know of Capricorn, but there’s another one that doesn’t get brought up nearly as often that I think probably should, given the attributes of Capricorn in their fullness.

You know the symbol of Capricorn looks something like this, right? 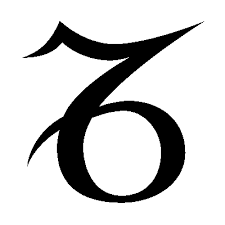 This symbol is actually not based in Greek myth or even Roman but rather, Sumerian. This is based on Enki, one of the very first gods and one of the three most powerful deities in Mesopotamian pantheon. (He’s also known as Ea.) Now, no one who’s familiar with a Capricorn or just the sign’s attributes would be at all shocked to learn that this is a god of wisdom. Water. Also, of intelligence, magic and creation, dwelling in the deep ocean beneath the Earth, he is often depicted as having the upper portion of his body, a goat and the lower, the tail of a fish. So, that makes sense, too.

He’s also often depicted alongside some very phallic imagery or with those included in his depictions and is a god of mischief.

I’m gonna tell you, every time I see those “What the signs say after sex:” and in the list, it has “Capricorn asks for a business card,” I laugh really, really hard because, truthfully, for many, the more honest answer to what Capricorn would say? Well, they might ask if you need some Tylenol and water because they’ve worn you out. Capricorns do enjoy being the best at all that they do, and this is no exception.

Even as Scorpio is sort of stereotyped as being the pervert of the zodiac, Capricorn gets the cold, aloof thing, which couldn’t be further from the truth. The goat just has very high standards, goals, and has what it takes to make all of those things not just meet expectation, but surpass them, more often than not. At the core of just about every goat you know is a steadfast, loyal soul that is hardworking and devoted. However, they can also tie materialism into their need for stability, can be very cold if they’ve decided you’re not worth forgiving, and their often paternal sort of stern dad seeming personalities can go very patronising if they feel their intelligence has been threatened. All too often, also, are Capricorns that become burnt out. Because they have an overwhelming sense of duty, they can have a habit of repressing a lot, taking on much more than they should, and this can often lead to behaviors others’ sometimes talk about. When a Capricorn goes selfish, there is no one more selfish, and nothing will bring that out like a goat taken for granted.

However, when there is a good balance there, Capricorns are some of the most giving and family oriented people you’ll ever hope to meet. They do tend to have a hard time finding their own balance when they’re focused on a goal, and can sometimes need to be reminded to celebrate small victories along the way, but, ultimately, anyone who really knows a goat or two can tell you, they do in fact let their hair down and tend to be a bit more beneath the surface than they let on.

When the Sun is in Capricorn, one of the best things that you can do is work on your goals, and man, no other time like when Mercury is in retrograde in Capricorn to boot. Pull back, organize and get ready to be more structured and more focused moving forward, blend it with a little dark humor and have some Earthy fun; you’ve got it nailed. That right there is just the Capricorn way.